Corporate charity in Russia is evolving, results of the Corporate Charity Leaders competition held annually by the Donors Forum, suggest. While, generally, charity budgets are being cut, the portion of funds allocated towards philanthropy is growing. Grants are becoming more common, as companies are getting more selective with picking beneficiaries. Corporate volunteering is also on the rise: experts estimate that over 20% of employees at large companies participate.

Sistema and its subsidiaries have always stood among the leaders in corporate charity, focusing on providing for both efficiency and transparency of the initiatives with strong and renowned CSR reporting practices. In 2018, Sistema allocated over RUB 1.1 billion toward charitable programs. Based on last year’s results, Sistema and MTS were among the leaders in the index family compiled by RSPP (exchange indices as of April 1st 2019). The indices in question are calculated based on an analysis of Russia largest ESG-focused companies held annually by RSPP.

In 2018, Sistema was independently assessed according to the FTSE4Good criteria and satisfied the requirements to remain a constituent of the FTSE4Good Index Series. It has been a constituent of the index since 2016. In the latest assessment, Sistema’s rating improved due to higher scores given to the Company’s Environment and Social practices, validating the commitment the Corporation has made to responsible investing and portfolio management, both at the holding level and within subsidiary companies, to improve overall ESG practices and reporting.

Sistema, MTS and Medsi were recognized with awards at the competition held annually by the Donors Forum jointly with Vedomosti and PWC. MTS was recognized for its Generation M program in the “Best program providing for reaching sustainable development targets set out by United Nations” category. Medsi, in turn, was recognized for its “Be healthy with Medsi” program in the “Best program contributing to development of infrastructure for NCOs, charity and volunteering in region of operations” category. Sistema was the overall ranking winner, recognized for its corporate charity programs.

Sistema is one of the largest corporate benefactors in Russia. In 2004, the corporation launched Sistema Charity Fund, which currently acts as the main charity operator for Sistema and its companies, including MTS, MEDSI, Segezha Group, Detsky Mir, Mikron, Cosmos Group, Binnopharm and others.

The Fund outlines its three major development vectors as: education in engineering (though the Fund’s Lift to the Future program), culture and arts, social environment and volunteering. In 2018, the organization reviewed its strategy and shifted its focus toward tech initiatives. The mission includes the following goals: contribute to implementation of new technologies and services, provide individuals with opportunities to develop professional skills in the tech segment, improve quality of life by applying technology.

In 2018, over 1 million individuals participated in the Fund’s charity programs, doubling the indicator for 2017. The total amount of funds directed at implementing charity programs in 2016-2018 was RUB1.3bn.

Lift to the Future, the Fund’s flagship program launched 7 years ago with aims to support education in engineering in Russia, has grown to develop into a body of initiatives. Through a partnership with Sistema company Mikron, the organization launched a continuing education program that hosted 20 project teams consisting of Russia’s leading tech school students.

In 2018, the Fund launched Odyssey, a competition, where participants offer tech solutions aimed at locating individuals lost in the woods with no connectivity access in 10 hours or less, regardless of the weather and time of day. Over 120 engineering teams from 40 cities In Russia have submitted their solutions. The Fund also held two grant competitions (Search Trajectory among rescue squad volunteers and System of Good Deeds among corporate volunteers), where winners split the grant fund of RUB 3 million.

The Fund sustains its initiative to provide hi-tech medical services to veterans. The program was initially developed jointly with the Government of Moscow and Moscow Veterans Council. Over 2,000 individuals have participated in the program since 2015.

Sistema Charity Fund has been a longtime patron of key aspects of Russia’s culture scene. In 2018, the organization targeted a third of its charity funds toward the Culture and Arts program, which includes charitable support of the Russian Museum and the Russia-wide Cultural Weekend project aimed at promoting the arts. The Fund supported the Russian Museum in the organization of multiple exhibits attended by over 220,000 individuals, while the Cultural Weekend project saw over 70,000 visitors in 10 cities across Russia. 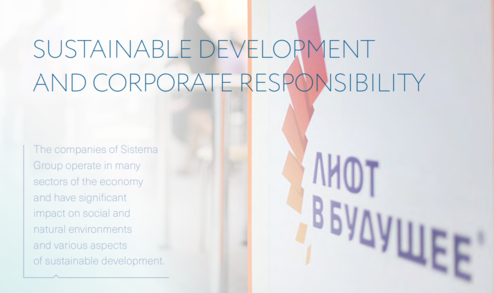