Pellets, also known as fuel granules, are produced from wood chips, bark and sawdust, which all represent production waste. Previously, where wood by-products would simply be burnt, now modern technologies implemented at Segezha’s Lesosibirsk LDK No.1 in Krasnoyarsk Krai, allow for processing of production waste in order to create a new product the company now exports.

The ecological safety of pellets as a fuel type is a strong demand-driving factor. In 2018, EPA placed pellets in the carbon neutral biofuels group. Pellets are produced with no chemical bonding agents, instead the bonding material used is lignin, a natural component of wood. The density of pellets is twice that of wood logs, they also produce 1.5 times the heat output of logs. Pellets are also a very versatile fuel type and can be used for both production and household needs.

While smaller wood processing facilities do install pellet plants, many realize that they do not have sufficient production volumes to provide for ample production quality, Segezha’s Lesosibirsk LDK No.1 , on the other hand, is one of the country’s leaders for lumber production. The plant yields a large amount of lumbering products, which it puts to use.

In 2018, a significant increase in import of pellets was seen in South Korea, while Japanese pellet imports were on track to exceeding 1 mn tonnes in 2018, double the amount imported in 2017.*

FutureMetrics estimates the current industrial pellet demand at 17.5 mn tonnes and expects that demand would amount 29 mn tonnes by 2023. Nearly 60% of growth is projected to come from Asia, UK and the Netherlands; other EU countries would be responsible for the remaining 40%. Forestry experts have estimated the 2018 global trade volume for pellets at 28.3 mn tonnes, up 26% y-o-y from 18.9 mn tonnes in 2017.

Households represent the second largest market for pellets. Experts expect that the segment will continue to grow at a steady pace, and Segezha notes a likewise growth in prices, allowing the company to plan an increase in production. To a European consumer, pellets provide for substantial economy as compared to fossil fuels. In 2018, Italy imported 2.3 mn tonnes of pellets and is currently one of the major markets for the consumption of the product among households*.

Segezha exports 100% of the pellets it produces to Denmark, Italy, Sweden and other European countries, and aims to offload three container trains with the eco-fuel through Baltic ports, as demand abroad continues to grow. The company supplied its first shipment in late December 2018-January 2019.The Lesosibirsk LDK No.1 pellets production line, launched in December 2018, is now fully contracted for the whole year. 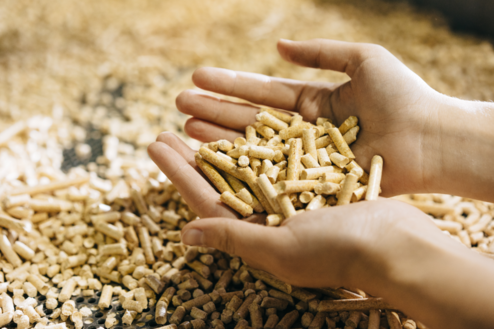