JSC Steppe AgroHolding is a major player in the Russian agricultural sector and owns a diversified portfolio of assets in such segments as crop farming, dairy farming, fruit growing and vegetable growing. AgroHolding's assets are located in southern Russia, in the most favourable regions in terms of climate, crop yields and logistics: the Krasnodar, Stavropol and Rostov regions and the Republic of Karachay-Cherkessia. Steppe AgroHolding owns 50% of RZ Agro, one of the major producers of grain and oil crops in southern Russia jointly controlled by Sistema and the Louis-Dreyfus family.

Today, Steppe AgroHolding is a big player in the Russian agricultural industry with substantial land assets (401,000 hectares, making it the sixth-largest in Russia). The key goal of further development is to create a major agricultural company in Russia, a leader in all its key segments in terms of both business size and operating efficiency, with favourable conditions for an IPO or attracting a strategic investor.

Steppe AgroHolding’s land assets as of the end of 2018 totalled 401,000 hectares (after an acquisition of land in the Rostov region in the second half of the year). Yields of the main crops remained high in 2018, exceeding average regional yields despite a drought in Russia’s grainproducing regions. Global grain consumption grew faster than production, which combined with an expected decrease in carry-over grain supported a recovery in global grain prices. The average export price of Steppe AgroHolding’s wheat in 2018 grew by 15% year-on-year; together with the high share of quality grain and increased export amounts, this made up for a slight decrease in the gross harvest.

In 2018, Steppe AgroHolding began actively developing the grain trading segment and established a full-fledged trading structure. Grain exports by the trading business exceeded 1.1 million tonnes in 2018 (up more than four-fold year-on-year), making Steppe AgroHolding one of Russia’s top six grain exporters in the first half of the crop year 2018.

In 2018, the company optimised its vegetable and fruit sales, developing a single brand, Steppe AgroHolding, for all produce sold to retail chains. 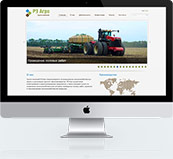